This is an exposition of some ideas of Conway, Curtis, and Ryba on

and a card game called mathematical blackjack (which has almost no relation with the usual Blackjack).

Many thanks to Alex Ryba and Andrew Buchanan for helpful discussions on this post.

An m-(sub)set is a (sub)set with m elements. For integers

, a Steiner system S(k,m,n) is an n-set X and a set S of m-subsets having the property that any k-subset of X is contained in exactly one m-set in S. For example, if

, a Steiner system S(5,6,12) is a set of 6-sets, called hexads, with the property that any set of 5 elements of X is contained in (“can be completed to”) exactly one hexad.

of X sends S to another Steiner system

. In other words, a Steiner system of this type is unique up to relabelings. (This also implies that if one defines

. In particular, such a definition is well-defined up to isomorphism.) 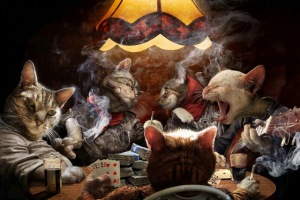 using the arithmetical geometry of the projective line over the finite field with 11 elements. This section describes this.

denote the projective line over the finite field

denote the quadratic residues with 0, and let

is a Steiner system of type

The elements of S are known as hexads (in the “modulo 11 labeling”).

In any case, the “views” from each of the three “points at infinity” is given in the following tables.

arrays may be regarded as the plane

. The lines of this plane are described by one of the following patterns.

The union of any two perpendicular lines is called a cross. There are 18 crosses. The complement of a cross in

is called a square. Of course there are also 18 squares. The hexads are

 
where abc is any cyclic permutation of 012 . The MINIMOG in the shuffle numbering is the array

We label the rows of the MINIMOG array as follows:

with finite slope occurs once in the

part of some tet. The odd man out for a column is the label of the row corresponding to the non-zero digit in that column; if the column has no non-zero digit then the odd man out is a “?”. Thus the tetracode words associated in this way to these patterns are the odd men out for the tets. The signed hexads are the combinations $6$-sets obtained from the MINIMOG from patterns of the form

. These are all possible $6$-sets in the shuffle labeling for which the odd men out form a part (in the sense that an odd man out “?” is ignored, or regarded as a “wild-card”) of a tetracode word and the column distribution is not

Furthermore, it is known [Co1] that the Steiner system

in the shuffle labeling has the following properties.

Mathematical blackjack is a 2-person combinatorial game whose rules will be described below. What is remarkable about it is that a winning strategy, discovered by Conway and Ryba [CS2] and [KR], depends on knowing how to determine hexads in the Steiner system

, jack, where the king is

and the jack is

). Divide the 12 cards into two piles of

(to be fair, this should be done randomly). Each of the

cards of one of these piles are to be placed face up on the table. The remaining cards are in a stack which is shared and visible to both players. If the sum of the cards face up on the table is less than 21 then no legal move is possible so you must shuffle the cards and deal a new game. (Conway [Co2] calls such a game *={0|0}, where 0={|}; in this game the first player automatically wins.)

The winning strategy (given below) for this game is due to Conway and Ryba [CS2], [KR]. There is a Steiner system

of hexads in the set

. This Steiner system is associated to the MINIMOG of in the “shuffle numbering” rather than the “modulo

The following result is due to Ryba.

Proposition 6: For this Steiner system, the winning strategy is to choose a move which is a hexad from this system.

This result is proven in a wonderful paper J. Kahane and A. Ryba, [KR]. If you are unfortunate enough to be the first player starting with a hexad from

then, according to this strategy and properties of Steiner systems, there is no winning move! In a randomly dealt game there is a probability of 1/7 that the first player will be dealt such a hexad, hence a losing position. In other words, we have the following result.

Corollary 7: The probability that the first player has a win in mathematical blackjack (with a random initial deal) is 6/7.

An example game is given in this expository hexads_sage (pdf).