The general reference matrix of Section 3 was:

being elements of any given finite algebraic field

being less than or equal to

This matrix contains determinants of order

) being single elements of the matrix.

We recall that if

-element check based upon the matrix

it being understood that

contain no vanishing determinant of any order: Let

, on the operand sequence

be a positive integer less than or equal to

. If, in the transmittal of the sequence

elements, whatever the distribution of the errors, the presence of error will certainly be disclosed, or will enjoy only a

chance of escaping disclosure, according as $v$ is, or is not, less than

denotes the total number of elements in the field

. The presence of error is evidently certain to be disclosed.

. There is no loss of generality of we assume [This assumption implies

. The errors cannot escape disclosure. For, to do so, they would have to satisfy the system of homogeneous linear equations:

in which the matrix of coefficients

contains no vanishing determinant of any order, and which, therefore admits no solution other than

For this treatment of the errors, compare Sections 4, 5.

. Without loss in generality, we may assume that the errors are

denotes a non-negative integer which may or may not be zero, we have

are transmitted without error.

If the presence of error is to escape disclosure, we see, therefore, that the

errors $\epsilon_i$ must satisfy the system of at least

denote a set of

. But the matrix of coefficients in this system contains no vanishing determinant, so that the only solution would be

For details in this treatment of errors, see Section \ref{sec:5}.

, where $h$ denotes a positive integer. Assuming that the presence of error is to escape detection, we see, therefore, that the

equations involving only the errors

), and homogeneous in these $z$ errors;

Since the matrix of the coefficients in the system (

) contains no vanishing determinant, we can solve this system for $z-h$ of the $\epsilon_i$ as rational functions of the remaining

) determines all errors affecting the

— that is, all the errors

— as polynomial functions of the

errors are determined as rational functions of the remaining

errors. In other words,

errors determine the other $t$ errors.

An accidental error can assume any one of $\Gamma -1$ values, there being

elements in the finite field

. Hence the chance that the errors will check up, and thus escape disclosure, is only

In Stanislaw Ulam’s 1976 autobiography (Adventures of a mathematician, Scribner and Sons, New York, 1976), one finds the following problem concerning two players playing a generalization of the childhood game of “20 questions”.
(As a footnote: the history of who invented this game is unclear. It occurred in writings of Renyi, for example “On a problem in information theory” (Hungarian), Magyar Tud. Akad. Mat. Kutató Int. Közl. 6 (1961)505–516, but may have been known earlier under the name “Bar-kochba”.)

is large but fixed, say

). Player 2 asks a series of “yes/no questions” in an attempt to determine that number. Player 1 can lie at most

is fixed). Assuming best possible play on both sides, what is the minimum number of “yes/no questions” Player 2 must ask to (in general) be able to correctly determine the number Player 1 selected?

There is a very large literature on this problem. Just google “searching with lies” (with the quotes) to see a selection of the papers (eg, this paper). It turns out this children’s game, when suitably generalized, has numerous applications to computer science and engineering.

We start with a simple example. Pick an integer from 0 to 1000000. For example, suppose you pick 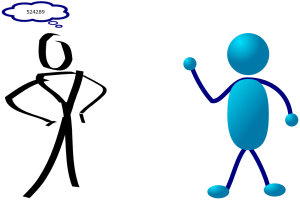 Here is how I can ask you 20 True/False questions and guess your number. 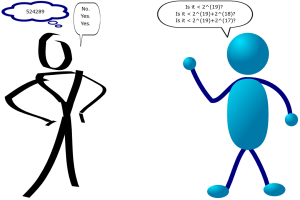 This is the general description of the binary search strategy:
First, divide the whole interval of size

into half and find which half the number lies in. Discard the one it does not lie in.
Second, divide the subinterval of size

into half and find which half the number lies in. Discard the one it does not lie in.
Third, divide the subinterval of size

into half and find which half the number lies in. Discard the one it does not lie in.
And so on.
This process must stop after 20 steps, as you run out of non-trivial subintervals.

This is an instance of “searching with lies” where no lies are told and “feedback” is allowed.

Another method:
I don’t know what your number is, but whatever it is, represent it in binary as a vector

?
You may determine the value of the

‘s from this (since each

This is an instance of “searching with lies” where no lies are told and “feedback” is not allowed.

is large but fixed, say

). Use the following notation: If the answers between successive questions is possible and then questions may be adapted to these answers (“feedback allowed”), call this minimum number of “yes/no questions” Player 2 must ask,

. If feedback is not allowed, call this minimum number

In practice, we not only want to know

) but an efficient algorithm for determining the “yes/no questions” Player 2 should ask.

In his 1964 PhD thesis (E. Berlekamp, Block coding with noiseless feedback, PhD Thesis, Dept EE, MIT, 1964), Berlekamp was concerned with a discrete analog of a problem which arises when trying to design a analog-to-digital converter for sound recording which compensates for possible feedback.

To formulate this problem in the case when lies are possible, we introduce some new terms.

A binary code is a set

is the field of integers

. If we assume, in addition,

is a vector space over

is a linear binary code. A codeword is an element of a binary code.
The Hamming distance between

of non-zero coordinates of

.
The minimum distance of

is the smallest integer

This is a 1-error correcting code of minimum distance

-error correcting if the following property always holds: given any

(in other words, there is at most one codeword within distance

denote the largest possible size of a binary code

Fact: If a binary code

denote the largest possible size of a binary linear code

. It is known that

(called the dimension of

answers to all the “yes/no questions” as an

is the set of all codewords corresponding to correct answers. Intuitively, if you are Player 2 and you ask Player 1 what the coordinates of his codeword

associated to his secret number is, and if he lies

times then you will receive from him a binary vector

from a codeword. Since

-error correcting, you can determine

We want the smallest possible

, to be more precise) have been tabulated for “small” values of

online at the MinT website (U. of Salzburg, Wolfgang Ch. Schmid and Rudolf Schürer), codetables.de (Markus Grassl), and Boston U. (Ari Trachtenberg). This gives us an upper bound for

, and hence also for

for “small” values of

Here’s a recipe for using online tables to find a good upper bound the smallest number Q of questions Player 2 must ask Player 1, if Player 1 gets to lie