During the prohibition era, organized crime made phenomenal amounts of money through illegal smuggling. Eventually, their messages were enciphered. By the late 1920s and early 1930s, these cryptosystems became rather sophisticated. Here is a memorandum form Elizebeth Friedman to CMDR Gorman in January or 1932 which gives an indication of this sophistication. 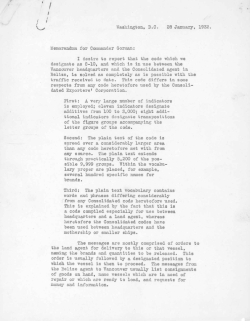 Many thanks to the George C. Marshall Foundation, Lexington, Virginia, for providing this reproduction!

The I Am Alone, flying a Canadian flag, was a rumrunner sunk by Coast Guard patrol boats in the Gulf of Mexico in March, 1929. The USCG knew that the ship was not a Canadian owned-and-controlled vessel but the proof went down to the bottom of the ocean when it was sunk. The Canadian Government sued the United States for $365,000 and the ensuing legal battle brought world-wide attention. Elizebeth Friedman decoded the messages transmitted by the I Am Alone, and those messages proved that the boat was, in fact, not a Canadian owned-and-controlled vessel. The case actually went to a Commission, whose final report was issued in 1935. They found, thanks in part to Elizebeth Friedman, that the owners and controllers of the vessel were not Canadian and used the boat primarily for illegal purposes.

The writing is that of EF and you can make out her (mostly) deciphered message.

For more information, see, for example,
“All Necessary Force”: The Coast Guard And The Sinking of the Rum Runner “I’m Alone” by Joseph Anthony Ricci, 2011, or
“Listening to the rumrunners” by David Mowry, 2001.