TS Michael passed away on November 22, 2016, from cancer. I will miss him as a colleague and a kind, wise soul. 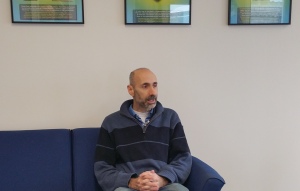 TS Michael in December 2015 at the USNA

Bryan Shader has kindly allowed me to post these reminiscences that he wrote up.

Indirect influence
TS indirectly influenced my choice of U. Wisconsin-Madison for graduate school. My senior year as an undergraduate, Herb Ryser gave a talk at my school. After the talk I was able to meet Ryser and asked for advice on graduate schools. Herb indicated that one of his very good undergraduate students had chosen UW-Madison and really liked the program. I later found out that the person was TS.

About the name
Back in the dark ages, universities still did registration by hand. This meant that for a couple of days before each semester the masses of students would wind their way through a maze of stations in a large gymnasium. For TS’s first 4 years, he would invariably encounter a road block because someone had permuted the words in his name (Todd Scott Michael) on one of the forms. After concretely verifying the hatcheck probabilities and fearing that this would cause some difficulties in graduating, he legally changed his name to TS Michael.

Polyominoes & Permanents
I recall many stories about how TS’s undergraduate work on polyominoes affected
his life. In particular, he recalled how once he started working on tilings on
polyominoes, he could no longer shower, or swim without visualizing polynomino
tilings on the wall’s or floor’s tiling. We shared an interest and passion for permanents (the permanent is a function of a matrix much like the determinant and plays a critical role in combinatorics). When working together we frequently would find that we both couldn’t calculate the determinant of a 3 by 3 matrix correctly, because we were calculating the permanent rather than the determinant.

Presentations and pipe-dreams
TS and I often talked about how best to give a mathematical lecture, or
presentation at a conference. Perhaps this is not at all surprising, as our common advisor (Richard Brualdi) is an incredible expositor, as was TS’s undergraduate advisor (Herb Ryser, our mathematical grandfather). TS often mentioned how Herb Ryser scripted every moment of a lecture; he knew each word he would write on the board and exactly where it would be written. TS wasn’t quite so prescriptive–but before any presentation he gave he would go to the actual room of the presentation a couple of times and run through the talk. This would include answering questions from the “pretend” audience. After being inspired by TS’s talks, I adopted this preparation method.
TS and I also fantasized about our talks ending with the audience lifting us up on their shoulders and carrying us out of the room in triumph! That is never happened to either of us (that I know of), but to have it, as a dream has always been a good motivation. 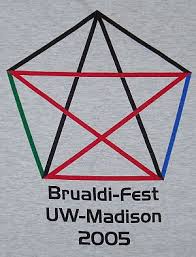 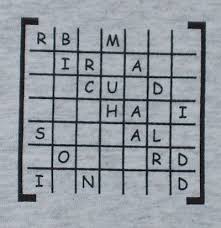 The second image (when the symbols are replaced by 1s) is the incidence matrix of the projective plane of order 2; one of TS’s favorite matrices.

Here’s a photo of the Brualdi and his students at the conference:

Here’s a caricature of TS made by Kathy Wilson (spouse of mathematician
Richard Wilson) at the Brualdifest:

Long Mathematical Discussions
During graduate school, TS and I would regularly bump into each other as we
were coming and going from the office. Often this happened as we were crossing University Avenue, one of the busiest streets in Madison. The typical conversation started with a “Hi, how are you doing? Have you considered X?” We would then spend the next 60-90 minutes on the street corner (whether it was a sweltering 90 degrees+, or a cold, windy day) considering X. In more recent years, these conversations have moved to hotel lobbies at conferences that we attend together. These discussions have been some of the best moments of my life, and through them I have become a better mathematician.

Here’s a photo of T.S. Michael with Kevin van der Meulen at the Brualdi-fest.

I’m guessing they are in the midst of one of those “Have you considered X?” moments that TS is famous for.

Mathematical insight
TS has taught me a lot about mathematics, including: